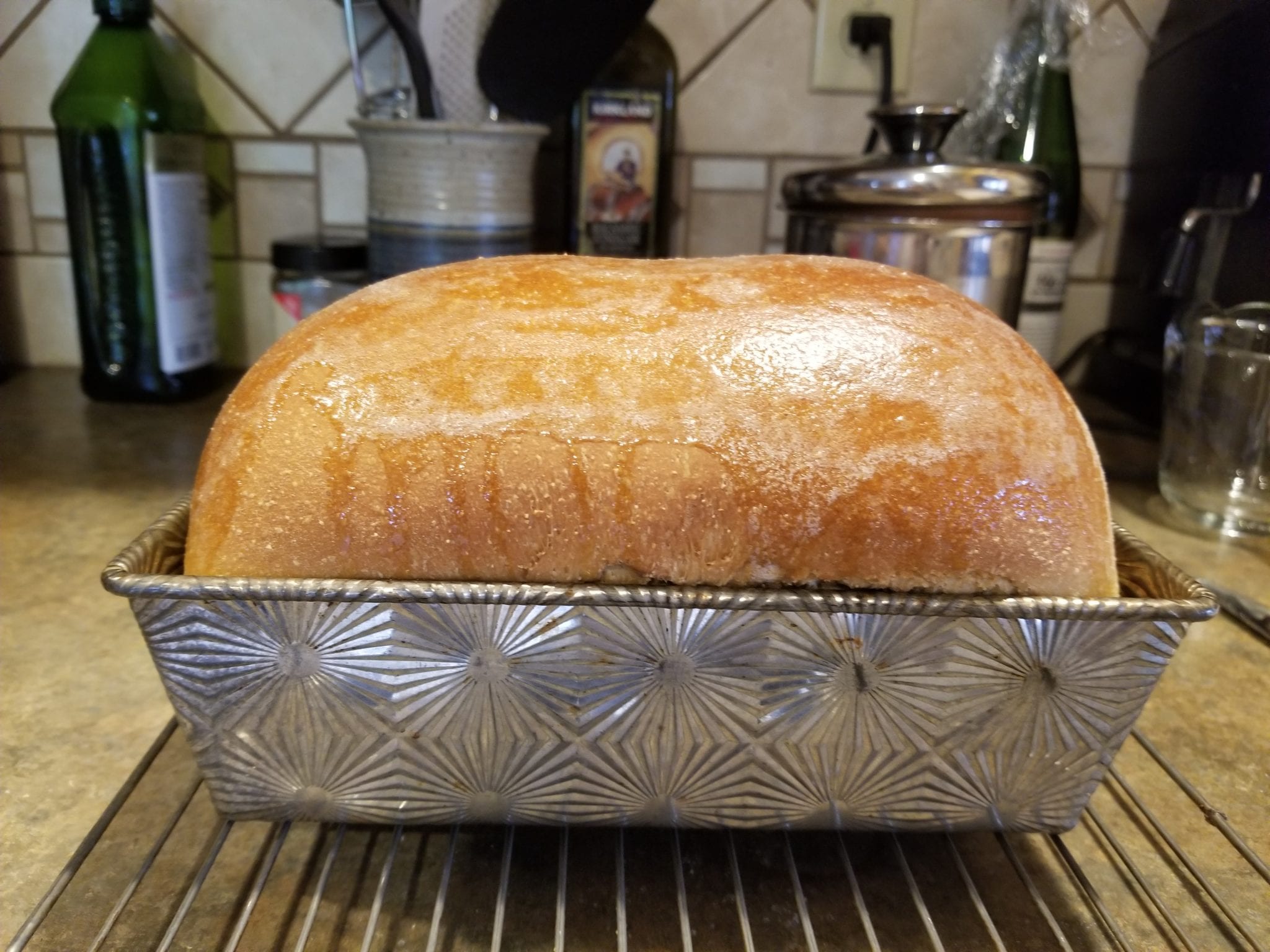 Becoming Grounded in an Ungrounded Time

We are living in challenging times: a society whose social fabric is fraying, a dangerous pandemic, environmental catastrophes and unrest in every part of the globe.  So, how is one supposed to be creative in the midst of this social and political cacophony that tears us apart through every single one of our senses, leaving us exhausted after just a few hours?  One searches for creativity that feeds the heart and soul, literally.  Food is where I found my creativity.  It grounded me when the world around me seemed so ungrounded.

At first I started watching movies having to do with food: French Kiss (about wine) , Chocolat (about, well, chocolate), Julie/Julia (about the Art of French Cooking).  I then began to move into series like the Great British Baking Show, Cooked, by Michael Pollen, which explores the culture of preparing food through the elements of fire, air, water and earth, and Chef’s Table (my favorite chef so far is Dan Barber).  Then I watched documentaries: Food, Inc., Michael Pollen’s In Defense of Food, and Sustainable.  But really, my get-back-to-basics idea began in 2002 with the PBS series Frontier House.

Getting back to basics is I needed in this time of too many unknowns.  Therefore, gardening and cooking became my  primary preoccupations. 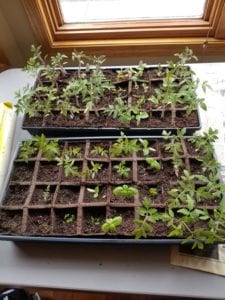 Rick and I had built two garden boxes, 4 x 8, and I needed to fill them with plants without going to gardening markets.  I’ll be honest, germs make me nervous, my cancer and following treatment (I’m 6 years out!) make me even more so.  Therefore, I was going to do as much as I could without leaving my house.  Which meant I would everything from seed, whether in flats or the garden: five varieties of tomatoes, french green beans, indigenous popcorn, crooked neck squash, zucchini, radishes, Swiss chard, eggplant, spaghetti squash, and a ton of herbs.  It was exciting to get them in the sprouting pans.  The plastic lid that fit on top allowed a tropical environment  to form as water evaporated from the soil and rained down on what was going to be a future for both the plants and my family.

Sprouting was going to take a while, so I turned my attention to making bread; wheat, being the “staff of life” took on new meaning for me.  Michael Pollen, a journalist who has become synonymous with understanding the importance of real food, points out that bread seems almost magical.  A gooey mixture of flour, water, salt, and yeast suddenly becomes this amazingly nutritious food that can feed a lot of people, with just the addition of heat.  He sees bread as being sacred, and I agree; there is a ritualization around bread, the mixing of ingredients, the feel and aroma of the dough and its manipulation, the kneading, the turning, the baking, the tasting, and most importantly the sharing.  I always serve bread (rolls or loaf) at family gatherings, specifically for that purpose: it is something I share with love.  As such, bread is the very symbol of hearth and home.  But it had been years since I actively baked bread, which meant I wanted to go beyond Betty Crocker.  So, going online I bought the book Bread Illustrated, and the tools necessary for the job of creating artisan bread.  I was laying the first stone in my symbolic hearth.

By the late April seeds had begun to sprout, tiny radish leaves followed by the red and yellow Swiss chard.  Corn soon followed, the seeds’ eruptions abrupt and significant.  A few days later beans and squash slowly unfolded their leaves as if waking from a long sleep.  Tomatoes were a bit more sluggish, but as spring sun poured through my south-facing window, they soon grew leggy, their stalks spindly in their quickened height, bending ever more intensely toward the window light.  I’m not sold on technology, especially if this experiment of mind was a bust, so I didn’t want invest in grow-lights.  Instead, I found a site that showed me how to create reflected light using a shoe box lid and tin foil, aimed at the backside of the seedlings.  The contraption worked like a charm and the stalks straightened up, growing thicker and stronger each day.  In early May, the snow had cleared and the gardens allowed me to go into their muddy borders and churn the soil, adding the contents of our compost pile to the already dark mixture.  A few cups of eggshells later followed by a few buckets of ash from our fire pit and we were in the gardening business.

I decided not to plant until the beginning of June; frost in Colorado can happen late in the season. and I didn’t want to risk losing all my carefully grown babies. I once more turned my attention to baking.  Like any kind of new project, it’s good to begin with something easy. You want those first tries to produce feelings of accomplishment and success.  My white and white sandwich breads provided just that: a fertile space for experimentation.

Scali (the Italian version of French bread) provided a sense

of wonder that something more complicated, (I was now working with a sponge, and the dough required braiding), could result in the best bread I’ve ever had!  But the early successes gave way to more meager ones: the rustic wheatberry is finicky and requires a lot of time and dedication to make it work.  The quinoa was interesting, but I used red quinoa instead of white and the look wasn’t entirely as appetizing. The Japanese bread had a beautiful texture and lovely aroma, but I wasn’t expecting so much sweetness.  I’ll make it again at some point in the  future when I AM expecting sweet.  The bread that made me question if I even had any kind of feel for baking was sourdough, a bread that requires dedication over a relatively long period of time, specific bowls and tools and attention to detail.  Let’s just say the dough never made it to useably sour, and probably went way past it.  Plus, I can buy it for about a buck a loaf.  So far?  Scali is by far my favorite.

I waited until the second week of June to plant the seedlings; rain was abundant saturating the soil.  So much would rot my seedlings in short order.  But so much rain ensured that days were cool and humid, so at least the seedlings wouldn’t get burned.  Over the period of  a couple of months these seeds had become nearly as valuable as my children!  And the fact that the seedlings were now “young adults”, I had to make sure they were prepared to live independently by placing them outside for longer periods of time, in cooler or warmer temperatures in order to harden them off.  In the meantime, I sowed cucumber seeds and the french green beans, as well as the spaghetti squash. and then waited with a sense of impatience for all of this to come together: for the seedlings to grow and the seeds to sprout  But I had some early success: I spied three .   And 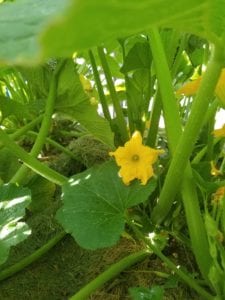 there is nothing like waiting patiently for the seeds to sprout.  However, I got an early present: two large green leaves, in the initial stages, coming up in several areas of the garden. I took a photo and immediately posted my question to a gardening group: what are these?  The answers came back quickly, Melons, definitely zucchini, some kind of squash, some kind of melon.  I let them be and hoped it was something wonderful.

It is now September and my garden has given me so much joy.  I’ve harvested and frozen my french beans and tomatoes, made my zucchini into bread and ratatouille, sliced and grilled my crooked neck squash.  The popcorn isn’t popping, but it will make a beautiful centerpiece.  And those rogue sprouts turned out to be spaghetti squash.  Three plants yielded about 20 squash, and there would have been more if we hadn’t had an early snow.  But, I know I have enough to get me through fall dinners.  Which, of course will be served with homemade bread.

My back to basics experiment worked.  It reset my perspective on the shape of our world, by the shapes that adorn my tables.  Bon appetite!