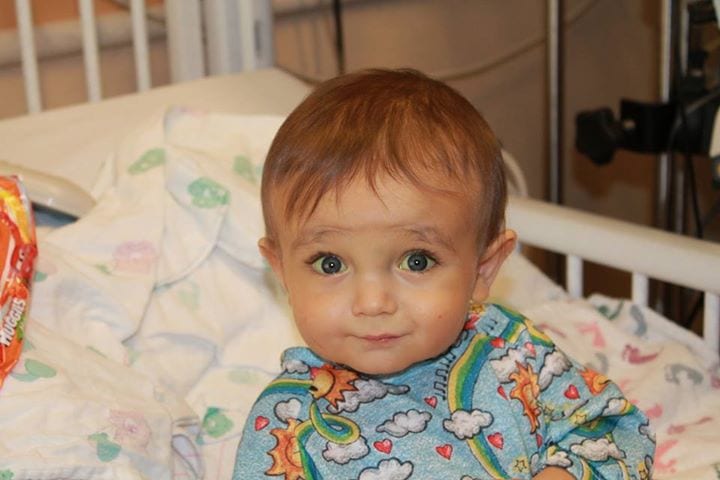 The Story of Riley Scott Harness

Riley Harness was born November 28, 2012, to Steph and Chris Harness, my son and daughter-in-law.  Riley had some difficulty coming in to the world: his heartbeat slowed dramatically with every contraction.  So much so that within an hour, the doctor determined Steph would need to undergo a Caesarian Section.  Riley was born beautiful and unmarred.  But because of his low birthweight, he would need to stay at the Pediatric ICU for a week.

For the next several months, Riley thrived.  He giggled, he danced, he intently watched his world.  He rarely cried.  That was a sign.

For months his parents and I watched for signs that he would crawl; he never did.  When he was put on his stomach, which had grown so large as to be ungainly, he fussed or cried.  And no one in the medical field seem to be curious as to  why he wasn’t crawling at nine months of age.  “Has his tummy always been this large?” asked doctor after doctor when he went in for his checkups, for followups, for those things that children go to doctors for in their first year.  Riley’s parents answered yes, because to them, his stomach had always been that big.  What else did they have to compare it to?  Riley was the first born.   The problem was that although it was the first question asked by people in the medical community, no one said, “Let’s just run a couple of tests.”

One afternoon Riley was rushed to the ER because blood pour from his rectum, soaking his diaper in minutes.  The parents were sent away with the instructions to contact Children’s Hospital Colorado within the next few days to schedule an appointment with a gastroenterologist.  The following morning at five a.m., I was awakened by Chris screaming, “Mom! Riley’s vomiting blood!”

The ambulance arrived seven minutes after I’d placed the call to 911.  Riley was fading rapidly.  One EMT later told us that we nearly lost Riley that morning.  At the ER, Steph listed Riley’s doctors appointments, findings, surgeries,etc., and Riley was immediately airlifted to Children’s Hospital Colorado on a Life-Flight Helicopter.  Having read the faxed list of medical issues, which included kidney swelling in-utero, swollen belly, hydrocele surgery for fluid collecting in his scrotum at seven months of age, and finally severe bleeding from his rectum and the following morning, his mouth, it was the liver team that met Riley at the helicopter.

Riley was checked into the Pediatric ICU and resided there, with his parents, for the next three and a half months, until his death on December 13, 2013.

You see,  Riley was waiting for a liver, and not just any liver.  Because of his age, he required a pediatric liver.

Riley’s new home, and that of his parents, was a fifteen by fifteen room, filled mostly with medical equipment: air masks, oxygen, monitors that beeped at all hours of the day or night, and a medication cart.  One wall was windows that looked outside from the third floor.  Another wall was windows that had a nurse stationed outside at all times.  Riley had a crib; his parents slept on the built-in couch, using its cushions as mattress pads – one on the shelf, one on the floor.

And they waited.  They waited through the blood tests, the scarification to ensure blood vessels didn’t rupture like they had, and the myriad of other procedures that kept him alive until a liver was located.  Being put on the organ transplant list is not easy.  It means the person has had to meet very specific characteristics in order to be deemed ‘in failure’.   (Read more about organ transplant needs at Pediatric Organ Donation and Transplantation).  The issue is there is a dearth of organs in general, and pediatric organs in particular.  (Read more about why people don’t donate organs at Why don’t more people want to donate their organs?).  Children’s Hospital Colorado is known nationwide as liver specialists, among other things.  But while Riley waited for his new liver, only two approved livers came into the unit, both of which went to children slightly higher on the wait list.  A third didn’t arrive in time.

No one wants to believe their child will die unexpectedly.  No one wants to think about what happens afterward if they do.  What can happen is life is saved, and lives may continue, although in a different form.  Because of organ failure, Riley was only able to donate soft tissue.  We hope it made a difference in someone’s life.

Please learn more about organ donation by visiting The Gift of Life and Imagine What You Could Make Possible.